Different Types of Backups in SQL Server – All Concepts Explained 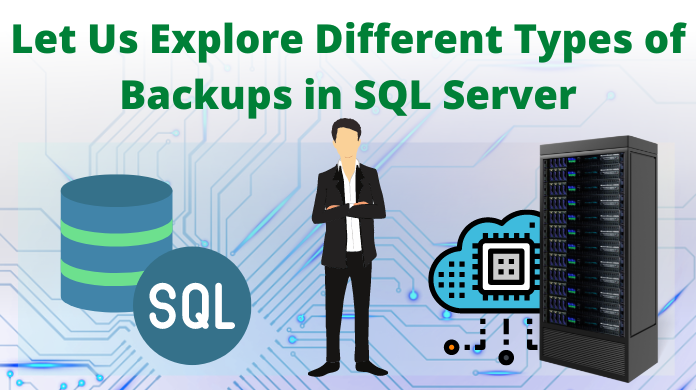 Summary: As we know backup acts as a savior in several scenarios where users lost their primary data files. In several scenarios, users complain that their SQL database is corrupted. Evidently, this blog is going to elucidate how many different types of backups in SQL server are there. In addition, the process to create the respective backups is also mentioned here. Stick to this article & get all the answers you are searching for.

SQL Server backup, in itself, is an immense topic; so tremendous. In this blog, we’re going to concentrate on the various types of backups that are accessible to us. This way we can see how to pick what we need, and what perspectives we base that choice on.

As a whole, we have five types of backup that are preferred by users the most. Below are these mentioned.

Important Note: If you’re reading this article then there’s a chance that you may have lost your SQL data files. File corurption & other errors are the major reasons behind it. You should use the SQL Database Recovery Tool to repair, recover & access your SQL database without any hassles.

What Is Backup and Types of Backup in SQL Server – Beginning

The most well-known kinds of SQL Server backups are full backups, also called database backups. These backups make a total backup of your database just as a major aspect of the transaction log, so the database can be recovered. This considers the least difficult type of database restoration since the entirety of the contents is contained in one backup.

To move further in this different backups in SQL server topic, perform the script mentioned in the below image: 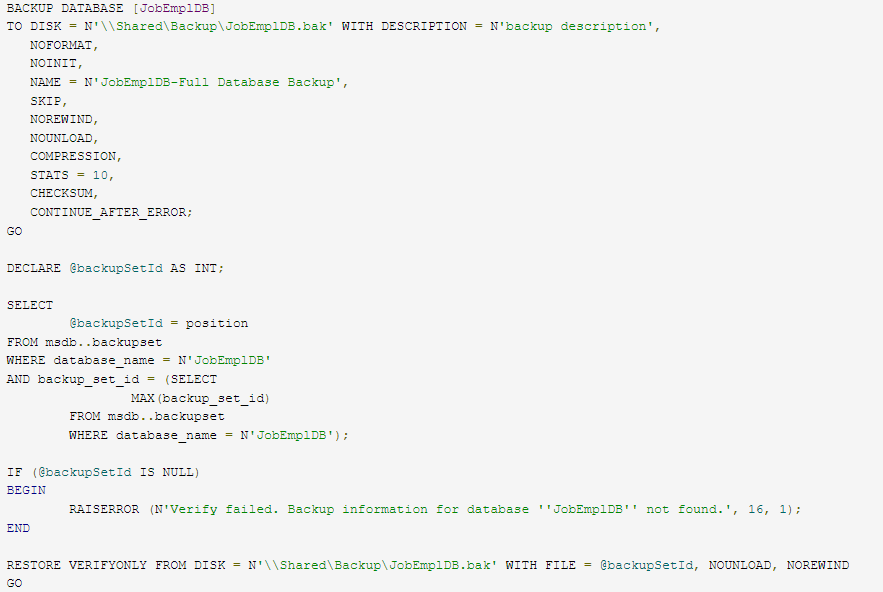 In the prompt window, Click on the General tab & then Select Backup Type as Full & Set the Destination.

Choose the following options on the Media tab as shown in the image. 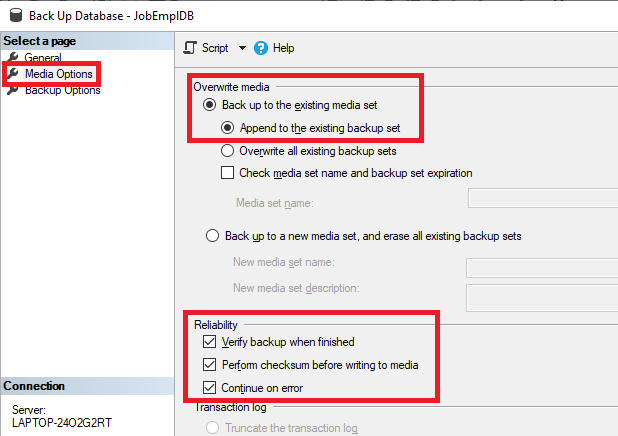 Carefully go through all the settings on the reliability group to avoid damaged backup files. Later, in the backup option, Set Compressed Backup option. Carefully execute this step as this type of backup is very important in learning how many types of backups in SQL server. 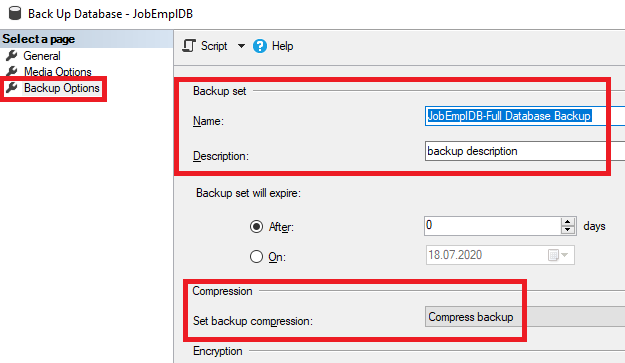 After these settings, finally, Click on the Script button to Generate the Script mentioned above. 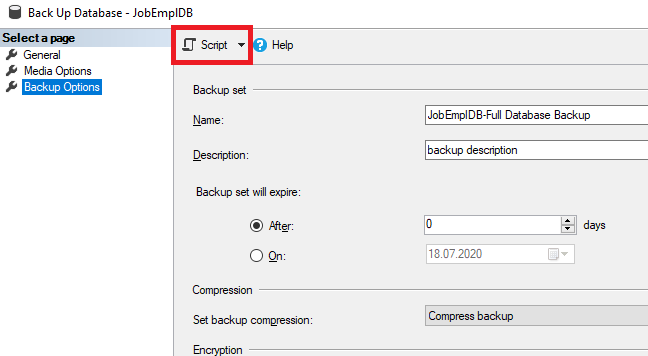 Users should Enable the option of Database Backup Compression to reduce the CPU load. Moreover, enable the Backup Checksum option with the below script.

Usually, differential backups are littler and quicker to make than the base of a full backup and furthermore require less disk space to store the backup.

In this manner, using differential backups can spare accessible space and accelerate the way toward making incessant backups to diminish the danger of data loss. At restoration time, the full backup is restored first, trailed by the recent differential backup.

The following image shows the script for the same: 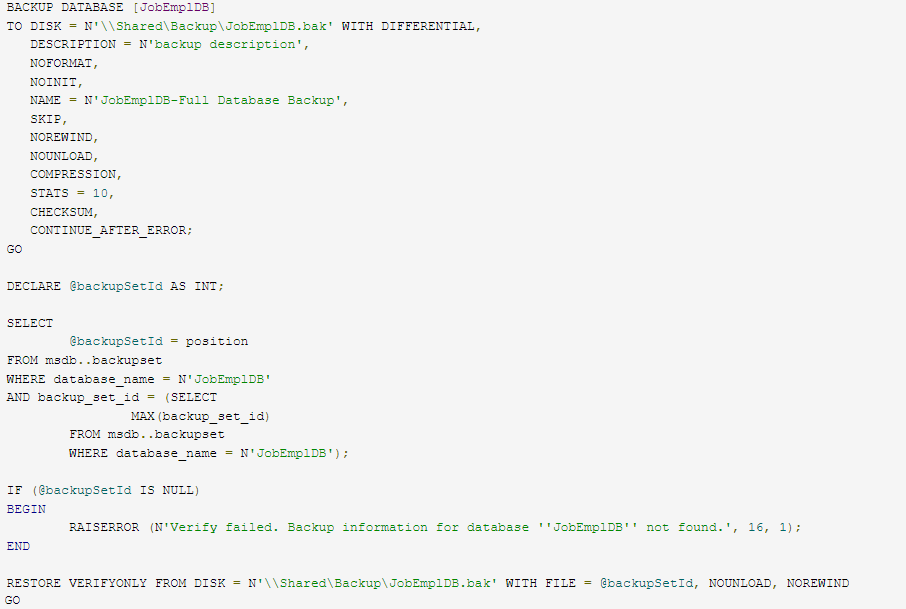 To create this script, users just need to Select Differential as the Backup Type option. 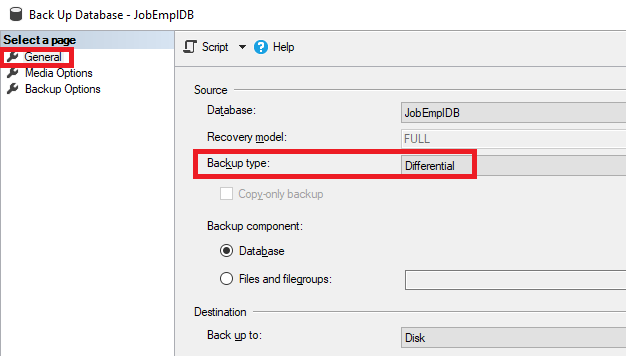 Below is the script used that users need to execute. It is very much similar to the full backup. 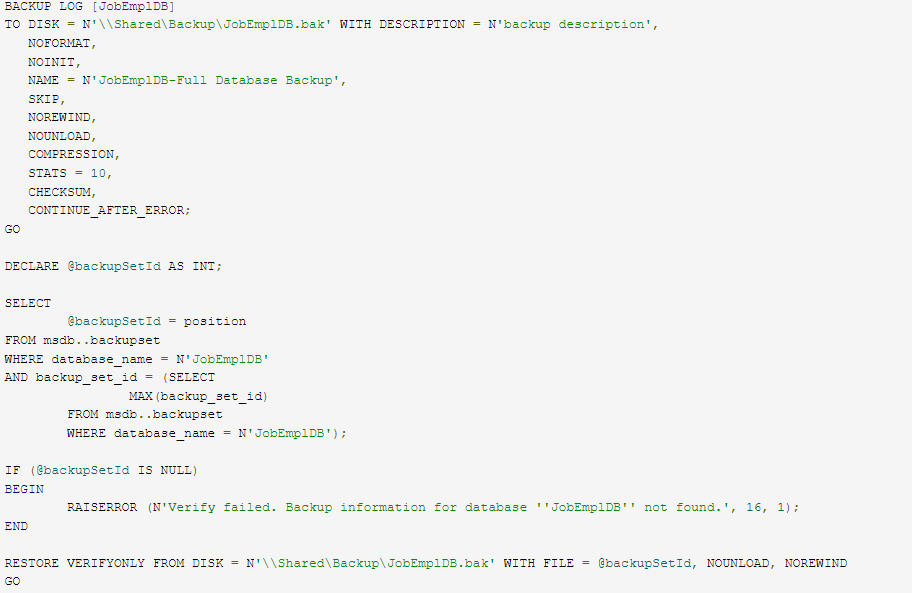 Now users need to Select Transaction Log in the Backup Type option to generate this script.

What is Partial Backup & How to Create It?

A partial backup can be finished uniquely by using T-SQL. The accompanying models tell you the best way to make a partial backup. If you’re learning types of backups in SQL server then you must be aware of partial backups.

To execute this one & make a backup of the primary filegroup, execute the below script. 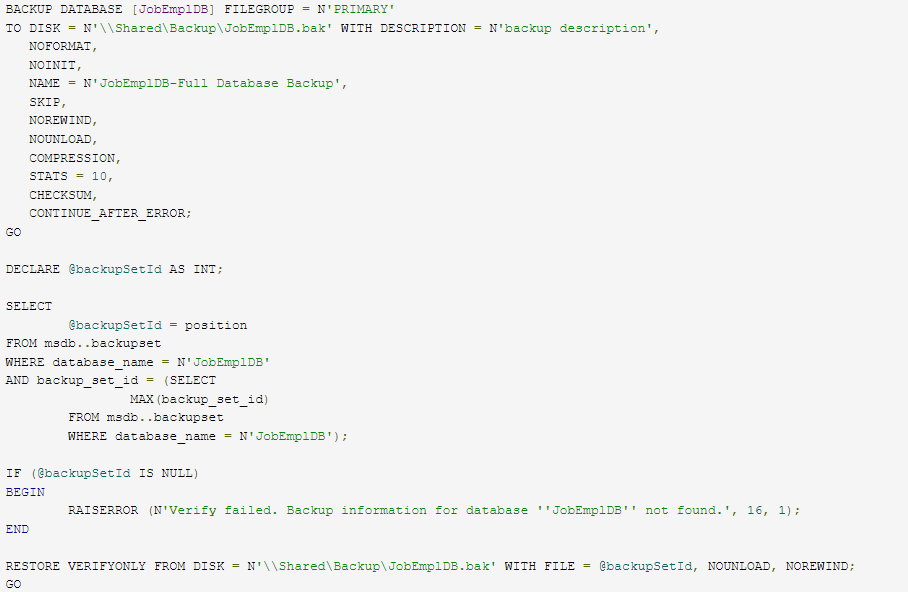 To take partial backup, the entire procedure is just like the full backup, users just need to make one change in the general tab. Instead of selecting the database, Select Files & Filesgroups Radio button. 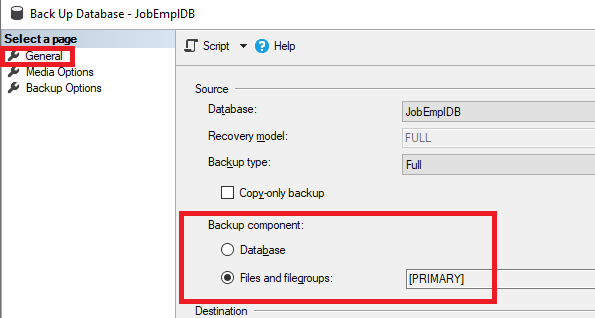 Similarly, users can also execute a partial differential backup whose script looks something like shown in the below image. 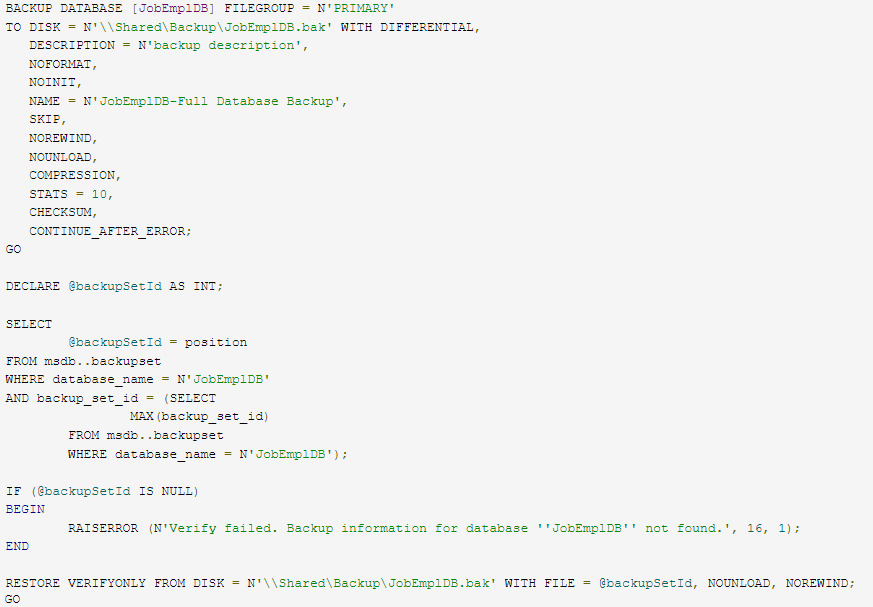 To create this script, just make this one change in the General tab. Select Files & Filesgroups. Moreover, Set Backup Type as Differential. 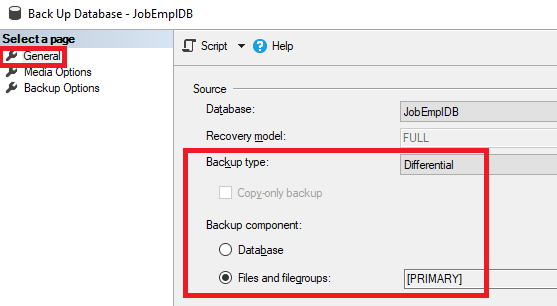 A tail log backup is generally created to keep the log sequence intact and undamaged. This includes all the entries missing in the previous backup. Evidently, as it starts where the previous backup ends, it’s like a tail & so is the name. We can also say that the tail log is the most recent version of the backup that we can find. It is one of the different types of backups in SQL server that users prefer a lot.

To execute this one, users need to execute the script that is mentioned in the below image. 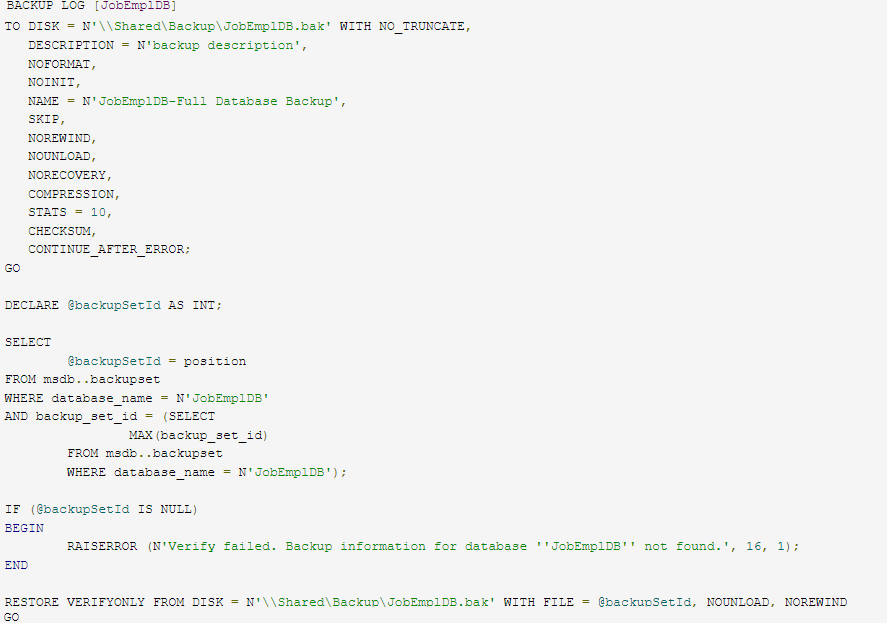 To generate this script, users need to make one change in the Media tab. Enable the Backup the tail of log option. 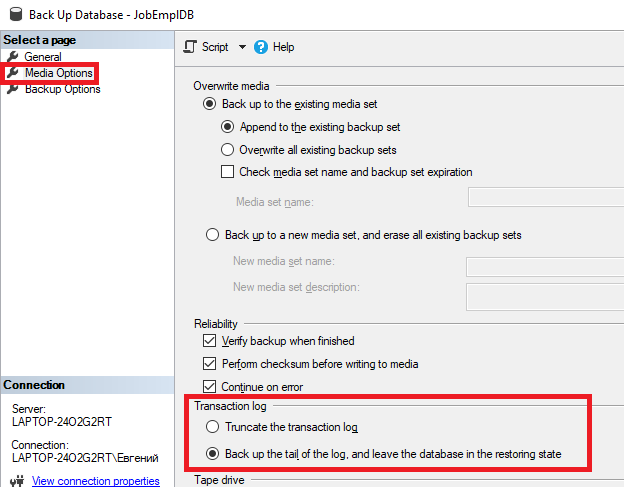 Apart from these, there’s a copy-only backup also. It can only be executed with full backup & log backup to run a special query with the backup along with the usual backup. Below is the image that shows its script to run.

Also Read: The user can also read another similar post to restore SQL database from Bak file in SQL Server 2019 and below.

It is important to have a backup of the database so that the user can recover the database through backup files. Therefore, in this blog, we have discussed how many different types of backups in SQL Server exist and how to create them.

Moreover, if you don’t have a backup file and you have to recover your database. So, we recommend using an automated tool such as SQL Recovery tool to recover the database.